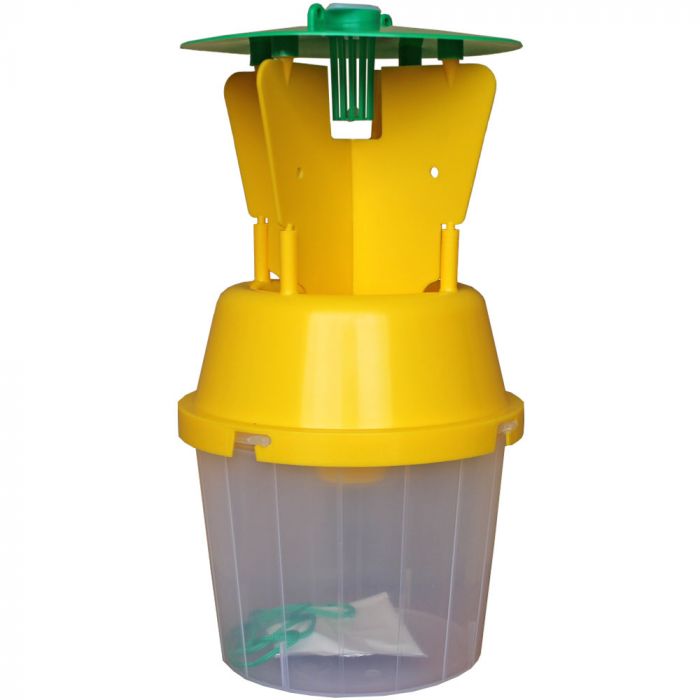 How the Chafer Trap works:

The trap is specifically designed to capture chafer beetles (Phyllopertha horticola) and is a crucial part of detecting and monitoring Chafer beetle numbers.

It attracts the chafers over a surrounding area of approximately 2000 m2 (depending on prevailing wind strength & direction) when they emerge as new adults and on their return to lay eggs in the soil. The beetle flies towards the lure, hits the yellow panels and falls down the cone into the collector base, below. They cannot get out.

At the beginning of chafer flight, it is advised to manage the trap twice weekly. In later weeks, the frequency of control should be adapted to the number of chafers being caught with the trap.

The trap can be re-used for many years; the pheromone lure lasts approx. 6 weeks and should be replaced. It can be bought separately.

If a catch of notable numbers of chafer adult beetles is made, then treat the lawn with nematodes in the period between mid-July to end of September

The trap can be used for many years. After the end of the chafer beetle flight the trap should be taken indoors where it can be stored without exposure to sun or temperatures below freezing.

The unopened, sealed pheromone lure bottle should be stored in a cool place. Stored correctly it has a shelf life of one year.

How to position the Chafer Trap